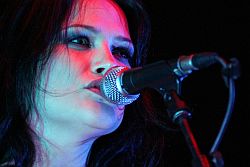 I am going to start this review admitting something: sometimes it can be really good being at concerts has a press member!! And at this concert in the Volkswagen Halle in Braunschweig it was a great example of it. A person standing outside the hall between 18h30 and 19h would see thousands and thousands of persons waiting anxiously for the doors to open and run to secure their places at the front rows. Being press and parking the car in a close and strategic place meant no waiting at the cold before entering and getting some fine spots at the front.

Some waiting was done inside, for Tristania only came on stage at 20h. An intro led to the opening song, "Libre". The sound was really good and strong and Kjetil Ingebrethsen, responsible for the growls, started calling for the crowd. Østen Bergøy, clean vocals, also entered really well on this song. It was probably the song where is vocals would be heard at their best. "Selling Out" followed and Vibeke Stene was not heard as well as she might have been. Still Kjetil was good and always enthusiastic, running around the big stage – he could sing on both sides, because there were two microphones, one of them also used by Anders Høyvik Hidle when he accompanied the growling singer with sharp high growls. The crowd responded and clapped, but was far beyond really enjoying.

"Beyond the Veil" and "World of Glass" would be some of the highlights of their show. "The Wretched" followed and here we could hear Vibeke in a surprisingly good lower tune. Then the great "Sequel of Decay", "Circus" with Vibeke singing without taped chorus behind for a while (really good! they should do it more often; Østens voice was barely heard) and Angellore were their last chords for the night, finishing at 20h49. Their concert was simply great and they deserved much more from the audience, but the public was there clearly for Nightwish and even clapped harder when they announced their last song! But they said that still they had fun and enjoyed themselves!! The line up wasnt complete, because as announced Einar Moen, the keyboard player, is not doing this tour with the band. It was also known that they have a second guitar player supporting them on the tour. But still there was another particular fact: the bass player, that actually had a familiar face to me, was not Rune Østerhus (that for reasons completely unknown to me is also not playing) but Kjell Rune Hagen from Trail of Tears. In my opinion, he fitted the band really well and it was good to see them interacting with each other and both Anders and Kjell doing some serious head banging.

After all this, there was a big pause. The soundtrack for the break was Iron Maiden and we had a good opportunity to remember the classics and many people, including myself, were signing along with the music. 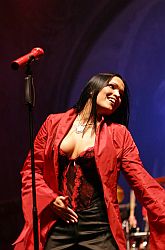 Now it comes to the point of doing some serious critics! I love Nightwish, seriously, but some things should be noted here. Nightwish only came on stage at 21h35! The stage had been ready for them at 21h10! They took exactly 46 minutes!! This comes along with all the concept of bands getting too big!! They just think they can do everything they want, like leaving a crowd waiting that long, with no apparent reason! And they only allowed the photographers to do pictures during ONE song!! I think everyone knows that normally, everywhere, the photographers can take photos during three songs! But not this time, the band did not allowed it. All of this seemed quite weird and upsetting in my point of view.

This whole waiting situation meant that when they finally came on stage, the crowd was completely hysterical!!! The members entered one by one, getting their individual applauses and, of course, when Tarja came on stage it was the time for the bigger hysteria (if that was possible at the time). Many young girls screaming as loud and sharp as they could.

After the intro, came "Dark Chest of Wonders", the opening song from their last album "Once", and then "Planet Hell". "Come Cover Me" was the first song from their older material and it sounded really good, followed up by "The Kynslayer", both from "Wishmaster". After these songs, Marco Hietala addressed the public for the first time, with his particular voice and good humor. He is definitely a great artist and with such a big presence on stage. Then things calmed down a bit (the crowd was completely wild and making great pressure to the ones on the front) and it was time for "Siren". "The Phantom of the Opera" is always a secure highlight, especially when Tarja Turunen reaches that high note at the end. Though, I have to say that it seemed to me she did it a bit too soon yesterday (it sounded better at the Color Line Arena show).

After this song, Tarja left the stage and it was the time for the guys to do their thing and show the audience what they can do by themselves. Not playing "Symphony of Destruction" as they did on the first part of the tour, they chose to do another beautiful cover: High Hopes from Pink Floyd. It was simply brilliant, at least for me (its one of my favourites from PF), but the crowd didnt know the song that well! It is maybe a bit old for this youth. Marco interpreted it with a good feeling, Emppu stroke his guitar in his so particular way and Tuomas Holopainen laid the keyboards in a way people could see his hands playing the cords. Jukka always shows he is a great drummer. Other highlights took place after that, with "Bless the Child", the hymn "Wishmaster" and then a solo Tarja singing the Finnish song from "Once" "Kuolema Tekee Taiteilijan". Finishing the first part of the concert, the band interpreted "Slaying the Dreamer" and the hit "Nemo", accompanied by rain falling in front of the stage at the songs end. It was 22h40 and the screaming crowd demanded an encore. The beautiful ballad "Sleeping Sun" was chanted and then "Ghost Love Score", one of the best songs they ever composed that it is simply fantastic live! Reaching this point, Marco says what every crowd wants to hear: that they (we) were one of the best audiences they ever had! Finishing with a bang (actually several) was "Wish I had an Angel", also a big hit single from their latest album. The clock marked 23h08. Tarja had taken the opportunity to change cloths and appeared in several combinations, which fitted her well, during the several times she left the stage.

Another thing that should be noticed: the pyrotechnics and fires work really well and contribute so much to the show, but they were really close to the public. Still, besides all the critics, the concert was simply great! As one expects from Nightwish at this point of their career!