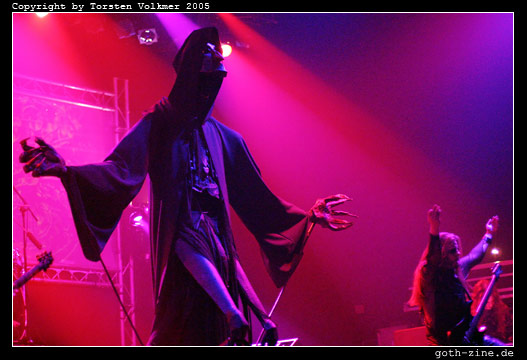 In this seriously cold day (it did not stop snowing all day long), finding shelter in the Docks had a double meaning: not only seeing these two bands but also preventing oneself from freezing. So the entrance that took place around 19h was anxiously awaited. 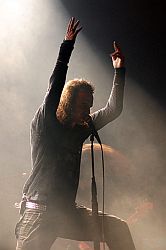 Around 20h Moonspell came on stage. I still thought The Haunted had already joined the tour and would be the opening act, but it wasnt so. The band started their set with the opening song from their last album ("The Antidote") "In And Above Men", followed by "From Lowering Skies", the classic "Alma Mater" that ended abruptly to give place to "Vampiria", both from their debut album "Wolfheart". Moonspell presented themselves in a simple form, only with a skull banner on the back of the small part of the stage they could use and few ornaments. Fernando Ribeiro was in is typical form, letting the music flow through is movements and words and calling for the crowd. The spectators gave the band some support, but many did not seem to know the material, even though many songs were from the bands first albums. The next tunes were "The Southern Death Style", "Opium", "Wolfshade (A Werewolf Masquerade)", "Mephisto" and with "Full Moon Madness" they ended their performance at 20h50. Though the audience had a good reaction, they were not under the moonspell.

Cradle of Filth would only come on stage at 21h27. In the mean while, the space had been prepared for them and, of course, the stage was much bigger than the part Moonspell had utilized. The drums were in a higher area and big screens were on the back, where during the concert images would be projected. Cradle do not have roadies for this tour, they have monks working for them! Lets say all the roadies were wearing monks costumes, some of them even having appropriate hair cuts! 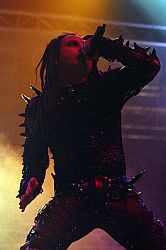 As the band entered on stage, the crowd was already noisy. But Docks wasnt has full as one would think, considering it was a CoF concert. There was much space and a person could actually breathe there. After hearing a spoken introduction, welcoming the audience to Hell, "Satyriasis" gave place to "Gilded Cunt" and two devils came on stage: green devils, one male and one female. They could have been a bit more convincing. The next was "Nemesis", also from the newest "Nymphetamine" album, and here we could see James McIlroy doing some head banging with that beautiful hair of his. At the end of the song, Dani started calling for the crowd and took the chance to dedicate the next song, "The Black Goddess Rises" – from the 94s "The Principel of Evil Made Flesh -, to the beautiful girls/woman that had been in the signing session earlier that day. When Dani gave is sharp screams, the sound was always good, but when he sang with lower grunts/growls is voice was barely heard. The first highlight would could a bit later with "Her Ghost In The Fog" and the single version of "Nymphetamine" followed. The Overdose version would maybe be more appropriate to the show and, unfortunately, Sarah Jezebel Devas vocals on this song can in no way match the voice of Liv Kristine, though Sarah did a great job on the rest of the show. She could have been in the different position, for the people on the left side could hardly see her. During this song, the two guitarists of the band were soling at the same time, but still, the bands presence was scattered and it seemed there was no great chemistry on stage. It is true that they were not in their original formation, for the bass player Dave Pybus is not touring with the band at the moment, for personal reasons.

At 22h18 the band left the stage for a moment and before they came back a huge puppet portraying Death appeared, with its red eyes, waving its dreadful hands on the air and then moving at the sound of the bands tunes. The "The Promise of Fever" and "Thirteen Autumns and a Widow" – this last one from the "Cruelty And The Beast" album- were interpreted and finally the band was looking a bit more enthusiastic. The light system, that had been not that good, was getting much better. Death came on stage once again, but this time without hood, showing a crest on its head. The band members had their back turn from the public and left once again at 22h42. The audience demanded an encore and "From Cradle To Enslave" was the song chosen. The video clip could be seen at the same time in the middle screen and a man and a woman came on stage, with some kind of chainsaws that were releasing sparks. Sarahs voice could have been a bit louder. At 22h50 Cradle of Filth left the stage and the audience didnt even asked for another encore.

The show was interesting, with the extras and all, but the songs were a bit too repetitive and sometimes Danis screams can be a bit painful. The price of the ticket was also a bit high, what might explain that the Docks wasnt full, and no pictures were allowed, except for the photographers, during the three first songs.